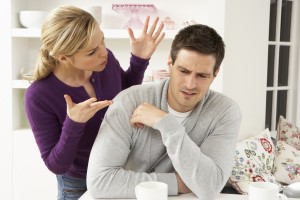 Lately I’ve noticed that nearly all the people I know are either married or engaged. While I’m not here to be a hater on marriage, I will say I hate when a woman has to beg for marriage. If you’ve been with a man for over two years and the word “marriage” has never came out of his mouth, you might want to re-evaluate. Most people would say, ‘Well, just bring it up yourself,’ but why? Men aren’t as dumb as we make them out to be. They understand what marriage is and know what that means to a woman and a relationship. They don’t bring it up because they don’t want to do it. Now, like most women you’ve already brought up the idea of marriage and instead of hearing, “Sure, why not?,” you hear, “Why?” If a guy says “why” to your marriage questioning, then he definitely is not interested. I’ve been there. I made excuses for why I didn’t want to get married at the time when really I just didn’t want to be with that person forever. The main excuses are “why do you want to put a title on this?”, “what’s wrong with what we are doing now?”, and “It’s like we are already married, so what’s the point?”. Now, my “male” side of thinking is agreeing with these excuses, but at the same time if you are with someone for 5 or 10 years, why aren’t you married? Both of y’all are obviously not going anywhere so what’s the big deal? Most men feel like marriage is a big commitment, but really if you are already with someone for over 2 years, you are already in a big commitment. Stop looking at titles and look at the person. If you know that you don’t want to be with anyone else, then marriage should be a natural thing.

For all those women out there constantly bringing up marriage around their man, please stop. You are not going to get him to ask you any faster, so just leave it alone. Either be happy with the relationship you have or make your move and leave. Love is love regardless if you have a ring on your finger or not.