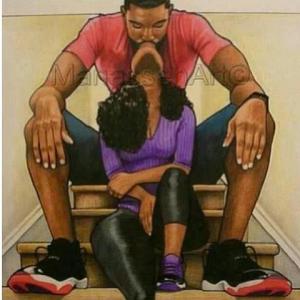 When I first saw this drawing, I immediately fell in love with it. To some it may look like a simple drawing of a young couple kissing, but for me I saw more. I basically saw what I want in a relationship. Sometimes I can read things for more than what they are, but hey that’s the reason for me being a writer, right? Anyways, I wanted to try to turn this into a blog post instead of a story. Yes, I have already came up with their entire life story lol.

First thing first, I say that this drawing is what I want in a relationship because basically the type of man that is represented is exactly the type of man that I want. You have to look at the details. The way that he is kind of overpowering her is the thing that attracted me the most to this drawing. To me it is saying that he is protective over her. He will always be there to have her back and to be there whenever she needs it. This is the one thing all women need in a man. You want someone who you can walk down the street with and not have to worry about being disrespected or tried by anyone else because they see the presence of your man. Example, in that horrible Tyler Perry movie, yeah I know which one right?, but Temptation. When Jurnee was walking down the street and the guy called her a bitch, and Lance just told her to get in the car…no woman wants that. We want a man that we know can protect us and will do anything in their power to uphold our respect and dignity. No, I don’t want someone who is running around cursing everyone out for looking at me wrong, but basically he needs to just have that presence. He isn’t outlandish with it. It is just recognized and understood by everyone he comes into contact with.

Second, his attire. I love a man that is a jack of all trades. He can go from the corporate world to playing ball with the fellas to attending a jazz festival at night and not break a sweat. It is something that is innate. I hate the guys who try to hard. This is the ultimate turn off. I want someone who I know I can go to all these different events with and never have to worry once about what is going to happen. Corporate thug, nice guy with a bad boy edge, however you want to explain it, it’s what I want.

Third, her posture. It’s like she is just where she is suppose to be. This is the most important thing to me in a relationship. I don’t want to feel like being with someone is a challenge or is work. It should just flow and be natural. There should be no games that are played. No talks with friends about how do I keep him home at night. Real love doesn’t work like that. I don’t care what people try to make you believe, it doesn’t. Real love takes no energy. Yes, you will have fights, but if you are not right there in that position with that person, it just doesn’t feel right. In this drawing, she is not overly emotional or all over him. She is simply kissing her man because she knows that he is hers. This is me to a T. I am not for all the extra that comes with some relationships. I don’t need to yell from the rooftop that someone is my man nor do I need him to do it. It will be shown in other ways. Most women do all that extra stuff out of low self esteem and fear. Fear that another woman is gonna take their man. But if he is really yours, he’s not going anywhere. And all that shouting from the hill that he loves you is unreal to me. There is a difference between him loving you and “acting” like he loves you.

The last thing is actually small. The couple in the drawing are not married. I know most are like why would that be something you want in a relationship? Let me explain. Of course I want the marriage. I have had it planned since I was about 10. But reality is I know my flaws and I honestly don’t know if I want to be married anytime soon. It could be because I haven’t been exposed to real love in about 10 years or because I have seen no marriages that are encouraging. But for right now, I am not interested. But the thing I like in the drawing is that they are that happy and there is no ring. Most people focus too much on the ring. They don’t think about the actual relationship. They don’t think about solidifying the relationship first and then think about the marriage. It’s always the other way around.

This drawing definitely set in my mind exactly what I am looking for and what I want in a relationship. Sometimes it is easier to say it then to actually find it, but at least if you know what it is, you will notice it when you encounter it. That’s another problem with a lot of people. They don’t know what they want. You wait until someone comes along and just roll with the punches. I’ve grown from that type of person and will never go back to her. If that means I will have to continue to wait then so be it. I will wait until I am that girl in this drawing. In love and secure and simply happy.

One thought on “My Version of Real Love”